When I think about all my races I did so far I can see that there is really a clear line how I choose out the races: there is no real straight line! All my races are different with distance, altitude or climate. Sometimes I see myself running through a desert then I find myself in the loneliness of the mountains in Romania and finally at the North Pole with temperatures of minus 31 degrees celsius. But this is what I really like: to never know what`s coming next. I could never be a road marathon runner. I like the changes in trails!
This is why I selected the "Lost Worlds Tuscany Crossing". I know the organization from the Transylvania Trail Traverse. When you remember my experiences I have made in the mountains of Romania where I met bears and dogs and some others I was really excited to go to Tuscany. Although I was not thinking that I will meet bears and dogs there. I signed in for the 53 kilometer with 2000 vertical meters. A distance I haven`t ran before. It looked like a fast race without technical passages. Just running uphill and downhill with no great climbing. I was interested in running fast as well to see the beautiful landscape of Tuscany. At the pre-race briefing and pre-race-pasta-party I was surprised that they served red wine for everybody: Italian`s Style! And during the talk about the race I suddenly heared my name and recognized that everybody was looking around until some of my friends lifted up my arm to show that it was me. Ok. It will be a race and not a training! Finally I saw myself eating a lot of Pasta and drinking a zip of redwine just because everyone did so.
The morning of the race was really cold and I got into my jacket and out of it and then again into it and finally I ran without. I said to myself that I will race as fast as possible and not to complain to look back or something else. Just 53km of solid running in a steady pace. I don`t know how fast I started but I saw myself leading the group of 180 runners for the next 3 kilomters. I was not sure if I could do so for the next 50km but I reminded myself to stay strong and focussed. I recognized that something was not running well with my breathing. I was not able to breathe deep into my lungs. Something was blocked and it felt terrible. I thought about asthma or an allergical reaction of some of the trees in blossom. The only way to breathe gentle was to inhale through the nose! That paced me down a bit and some other very fast male runners overtook me. I was fighting a lot with that respiratory problem and tried to calm myself down. After half of the track and as higher I got it felt better and suddenly I was able to breathe in a normal way.
The route was going through nice forests, uphill and downhill. I passed nice little Italian villages and thought about making a stop a the gelateria! The trails were mostly dirt roads so I was running fast. After I passed the highest point I saw the big old castle of Castaglione d`orcia far away where we had to go to. It was mentally tough and I started to run faster just to be earlier at the finish. I ran through wild open fields with the typical trees of that region and passed several vineyards. Really pretty! Finally I reached the finish line in 5hours 14minutes as the first woman. I was happy and exhausted! Running fast is really interesting! I got a big typical terracotta vase and some other nice food of the region and - of course- a bottle of red wine. The Italians are really nice! And the organization Lost Worlds Racing did a great job. UVU Racing gear was as perfect as ever! Thanks a lot! 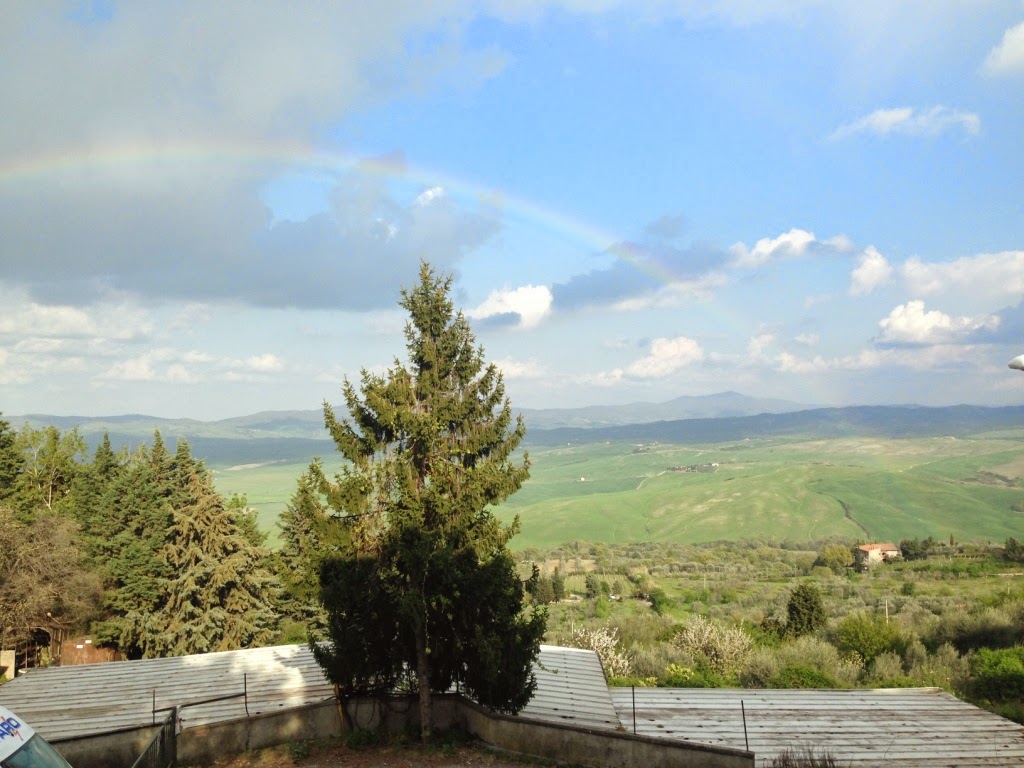 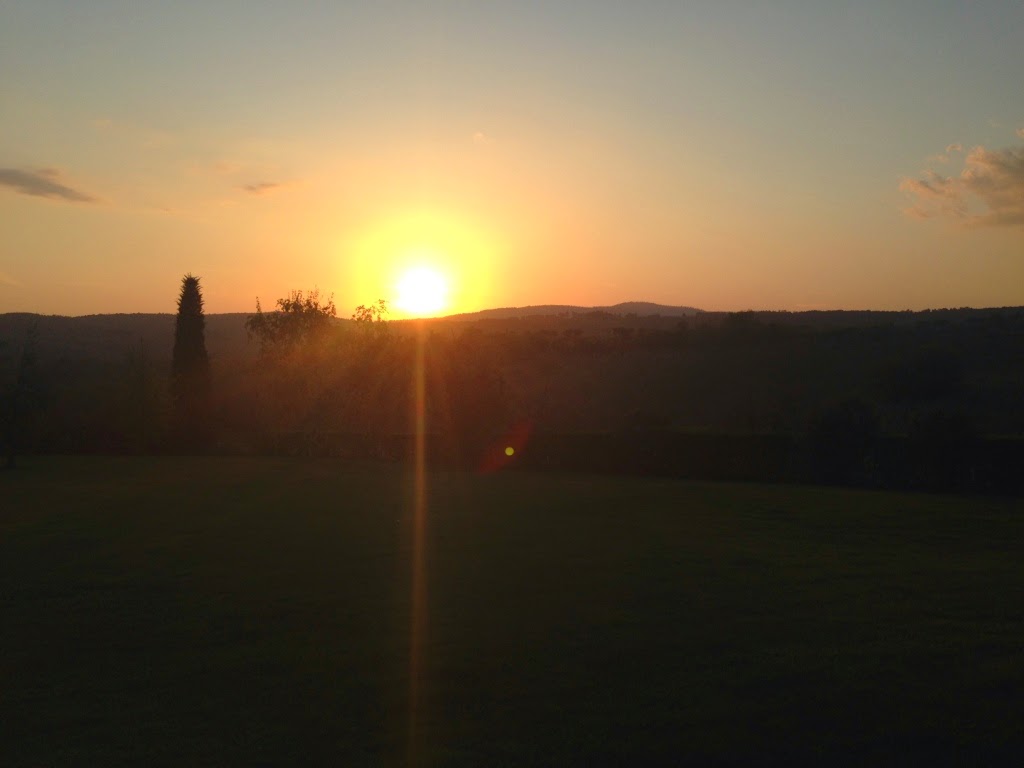 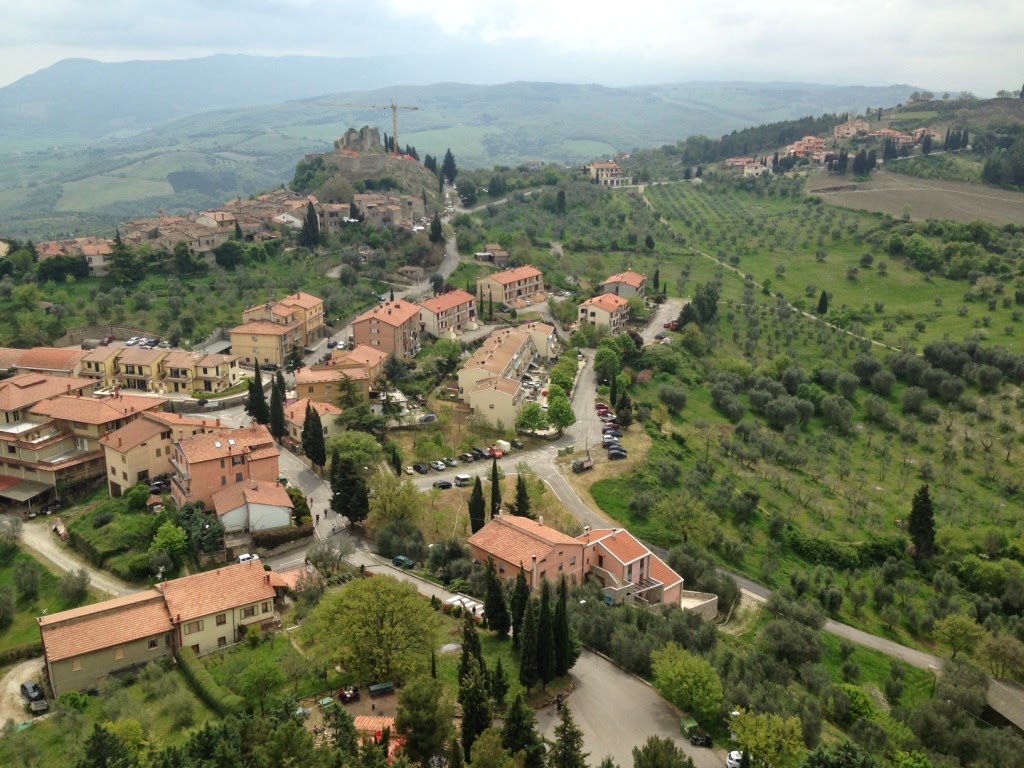 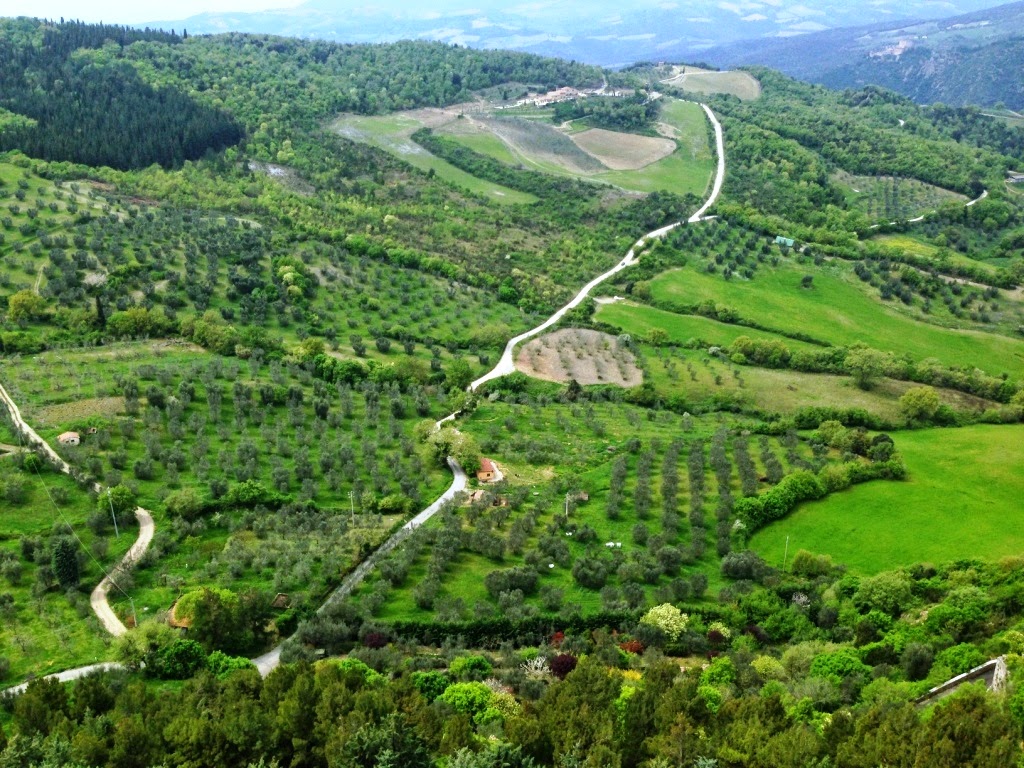 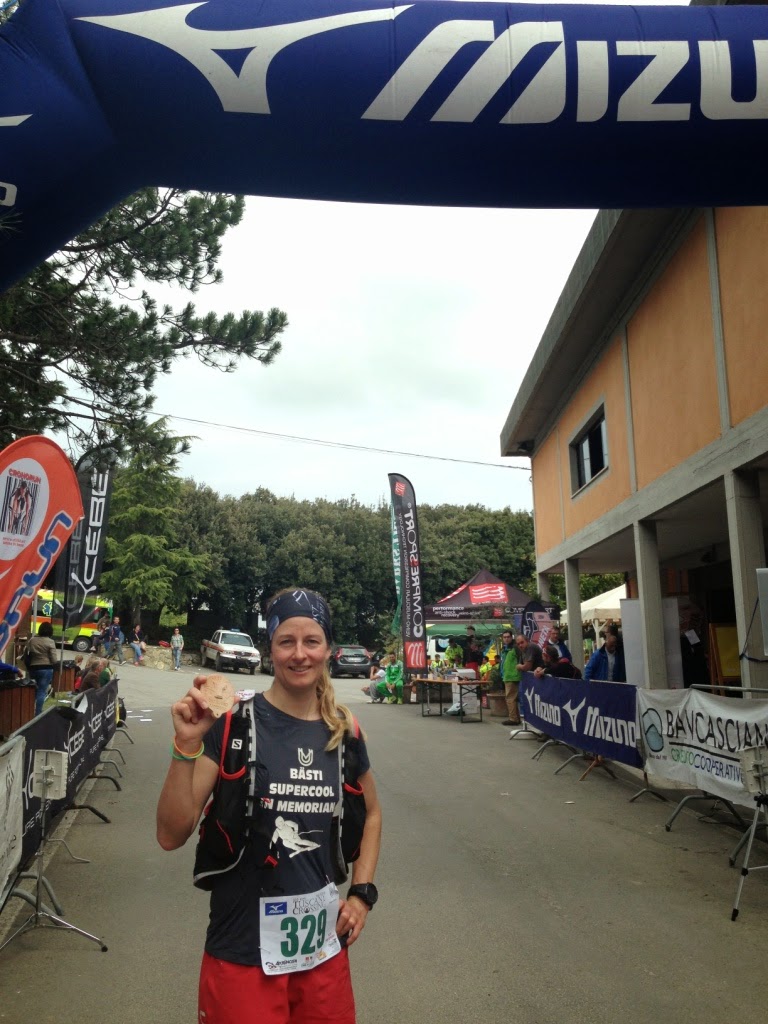 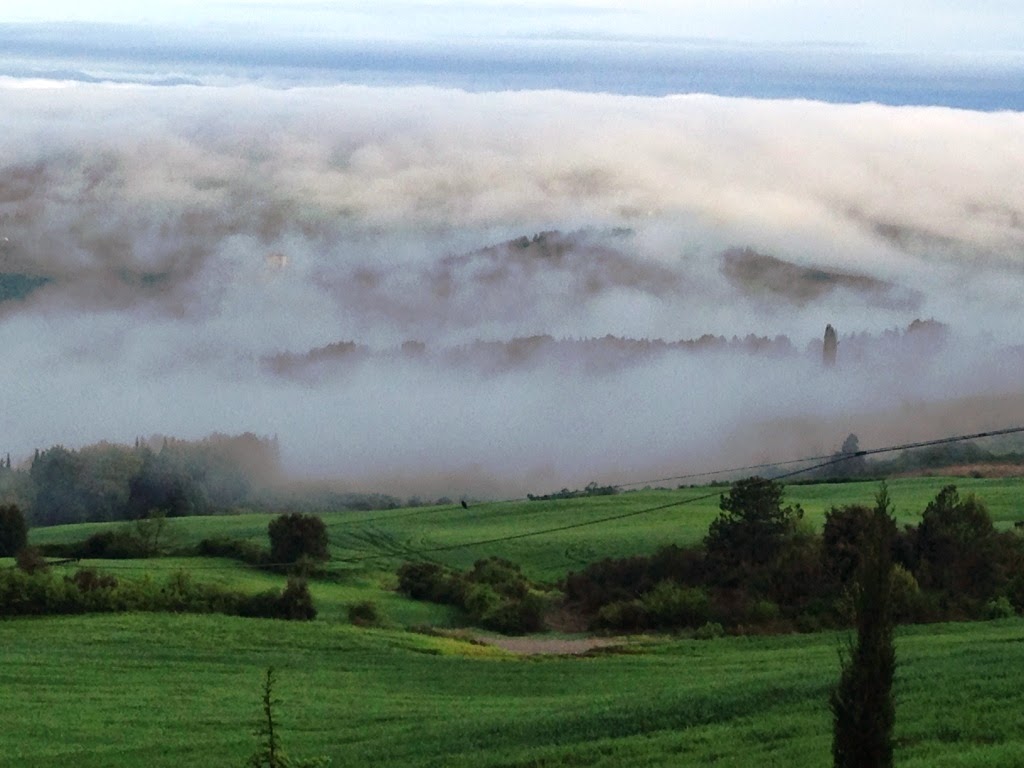 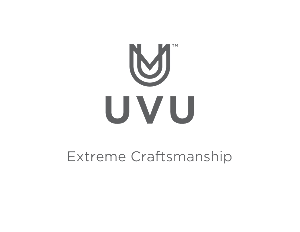 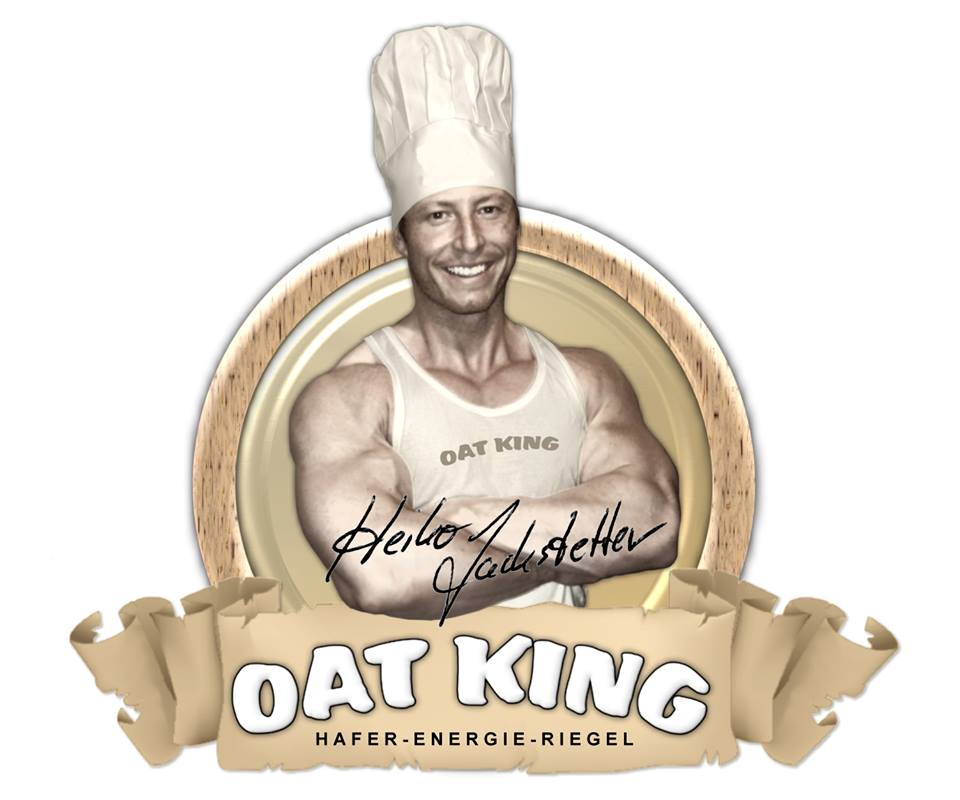